After an Indian media outlet made claims about Malaika Arora’s pregnancy, Arjun Kapoor took to his Instagram Stories and termed the reports ‘fake gossip’ and ‘garbage news’.

A Pinkvilla report claimed that Malaika Arora and Arjun Kapoor are expecting their first child together and the duo revealed the pregnance to close ones during his visit to London in October.

Kapoor wrote on Instagram Stories, “This is the lowest that you could have gone and you have done it by being casual. Insensitive and absolutely unethical. In carrying garbage news. This journalist has been writing such pieces regularly and getting away with it because we tend to ignore these fake gossip articles while they spread across media and become the truth. This is not done. Don’t date to play with our personal lives.” 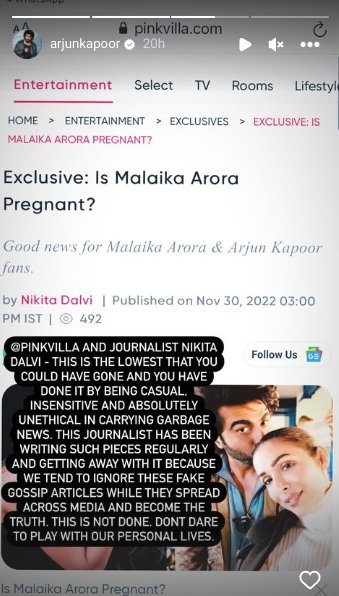 Malaika Arora was previously married to Arbaaz Khan. The two tied the knot in the year 1998 but parted ways in March 2016 after 18 years of marriage. They continue to co-parent their son Arhaan. While Malaika is currently dating Arjun Kapoor, Arbaaz is in a relationship with the Italian model Giorgia Andriani.

Malaika and Arjun are often spotted together and never shy away from expressing their love towards one another in public.

However, during his appearance on Koffee With Karan 7 earlier this year, Arjun revealed that he and Malaika are not thinking about a wedding as of now. “I wanted to focus on my career. I would like to see where I am going. I am a very realistic person, it is not like I need to hide anything. I am not sitting here and being coy. I would really like to be, professionally, a little more stable. And I am not talking financially, I am talking about emotionally. I would like to do work that makes me happy. Because if I am happy, I can make my partner happy. And I feel a lot of my happiness comes from my work,” he had said.

Earlier this year, too, there were rumours of the couple breaking-up. Arjun Kapoor had that time also taken to Instagram and shared a picture with his lady love, debunking the speculation around their relationship. “Ain’t no place for shady rumours. Stay safe. Stay blessed. Wish well for people. Love y’all,” he had captioned the picture.

The couple’s Bollywood friends Athiya Shetty, Tara Sutaria and Bhumi Pednekar had taken to the comments section to share their reaction. While Athiya and Bhumi dropped heart emojis, Tara wrote, “YES! You guys.”

On the work front, Malaika Arora is currently gearing up for her reality show ‘Moving In With Malaiak’ which will stream on an OTT platform from December 5, 2022. On the other hand, Arjun Kapoor will next be seen in Aasmaan Bhardwaj’s Kuttey, The Lady Killer with Bhumi Pednekar and Meri Patni Ka Remake. 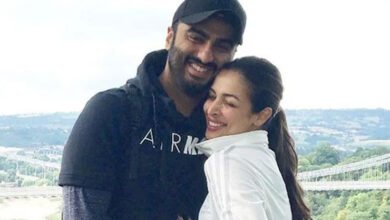 What Malaika Arora says on question about marriage, kids with Arjun Kapoor? 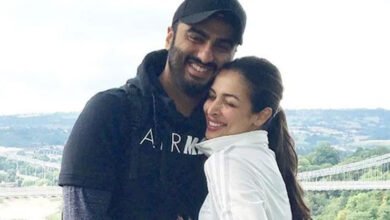 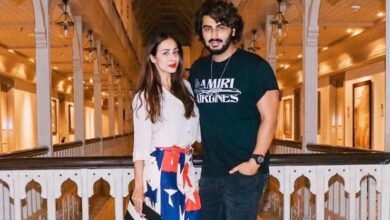 Malaika Arora Texts Arjun Kapoor – I Love You Too